Edmonton, AB – Between two large-scale projects taking place in 2023, Qualico Properties will have 630,000 square feet of industrial space under development in Edmonton.

The distribution centres, one for The Brick and the other for Home Depot, represent tremendous growth within Edmonton’s light industrial real estate market in recent years.

“These are some of the biggest industrials deals that Edmonton has seen,” said Jeff Sutherland, Vice President National Leasing and Sales, Qualico Properties. “Distribution centres are a significant growth area for the industrial market, and we’re happy to have captured the attention of two of the nation’s biggest retailers.”

“None of these large deals would be possible without the coordinated efforts of our entire team,” said Jeff. “Our development, leasing, and property management divisions work closely together to create properties that outshine the competition. The more success we achieve on large projects like these, the better equipped we are to succeed in the future.”

Slated to be completed in 2024, the 500,000-square-foot facility will be built on 28 acres of land in Qualico’s North 170 Henday Business Park. It will replace the 365,000-square-foot distribution centre already in Edmonton.

The new facility will represent the second largest in LFL’s portfolio. But the new distribution centre is much more than acquiring more warehouse space. The building includes a 60,000-square-foot 3-storey office component that will serve as the corporate offices of the Brick. 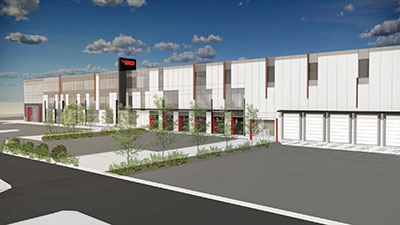 Located at 170 Street and 137 Avenue, the North 170 Business Park has been built out in three phases. The first phase includes an office/warehouse flex building with bays available for lease, with the second phase sold to another developer.

“North 170 Business Park has been in our portfolio for a long time, and we’ve had to adapt its development to changing market needs,” Jeff said. “The opportunity to develop the beautiful facility that LFL has envisioned is truly the highest and best use of the site.”

The Home Depot Distribution Centre, located in Acheson, is being built on 15 acres and the initial phase is 129,600 square feet of building space.  The home improvement products retailer has already initiated an expansion of 77,000 square feet that will make the total square footage 206,600.  This is the second building within the Acheson Industrial Lands development built for Home Depot.