Red Deer, AB – Empire Drywall is hard at work on the new $207-million Red Deer Justice Centre located in the city’s downtown, which will replace the older courthouse that is currently at capacity.

Once completed, the Justice Centre will be 312,000 sq. ft. and nine storeys with 18 ft. ceilings per storey, making it closer in size to a standard 18-storey building. It will feature 12 courtrooms, with room for future expansion to 16 courtrooms. The project is Empire Drywall’s third-largest in its more than 50-year history, its largest since 2020, and its only project in Red Deer. 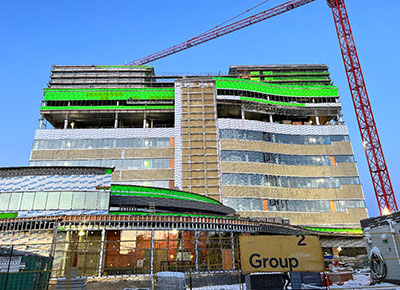 The company has taken on numerous scopes for the project, including exterior framing and sheathing, wood backing install, interior framing, insulation, drywall, and taping, along with some less common tasks, according to David Campbell, President, Empire Drywall.

“We are doing something quite unique with the acoustical and wood veneer accent panels we are supplying and installing, which are special order, high-end products,” he said. “We also have the scope for the translucent backlit LED panels being installed in various areas.”

The project’s scale and the numerous scopes Empire Drywall is responsible for means that the company’s onsite team is often large.

“No other company on site has as many scopes of work or workers as us, not even close,” David said. “We had over 85 workers on-site during the latest peak time working on six different scopes simultaneously.” 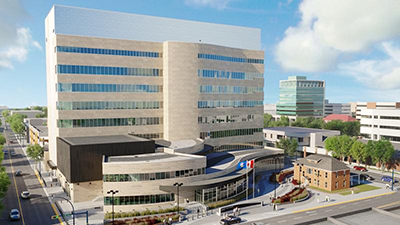 Although Empire Drywall was awarded the Justice Centre contract pre-COVID, and the project officially started in 2020, the company faced numerous site delays, material shortages, and cost increases for the project due to the pandemic.

Empire Drywall’s work on the project started in December 2021, and despite the challenges experienced, the team is on track to complete their portion of the project in summer 2023, when the entire Justice Centre build is slated for completion.