The street opening ceremony for Vogan’s Run took place on August 31, with staff, community members and Qualico President, Kevin Van, in attendance. Kevin shared a few words about the impact that Eric Vogan has had on the River Park South community, recognizing him as one of Qualico’s most influential and longstanding leaders.

“Eric has always believed in Qualico’s overarching commitment to ‘do the right thing,’ and simply put: to develop communities that make sense,” said Kevin. “His long-term impact on this community, and on many others, will be felt throughout the city of Winnipeg for years to come.”

Eric joined the Qualico team in 1979 as a member of the finance department, and by the late '80s, he became the Land Development Manager for Qualico Communities.

He quickly became involved with the development of River Park South, helping to broker the purchase of land that would become a considerable portion of the neighbourhood we know today.

Many years later, Eric would be instrumental in helping form the joint venture project with the City of Winnipeg, which built-out the remainder of River Park South. Partnering closely with the City and with the support of area councilors, Eric was there to bring the last phases of the River Park South neighbourhood to market. It was in fact city councilor Brian Mayes who brought forward the motion to name a street after Eric.

Kevin also spoke of how Eric’s commitment to architectural standards has set a precedent in the city that other developers have worked to achieve.

“Eric’s involvement in River Park South goes far beyond just purchasing the land," said Kevin. "Eric has always demanded higher quality design and architectural standards for all of Qualico’s communities, and River Park South is no exception. This can be seen throughout the community, from the natural beauty and curbside appeal, to the attractive and diverse housing styles. This will be a neighbourhood that will stand the test of time and will be enjoyed for years to come.” 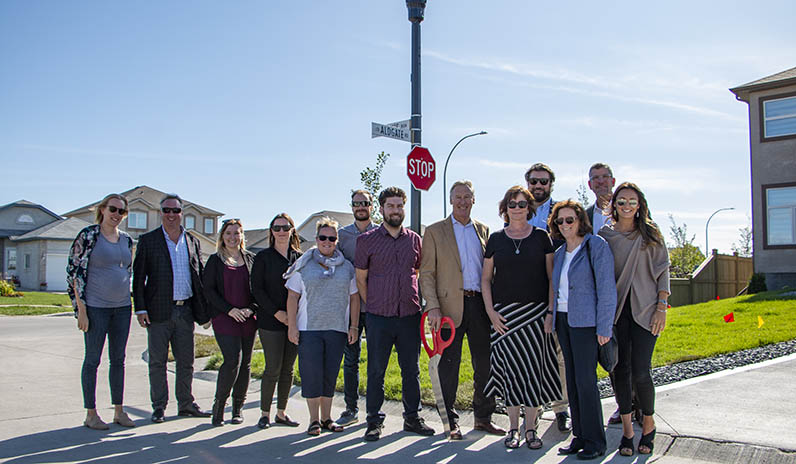 Eric also established a developer/builder matching program in River Park South in the late '80s, a first for Winnipeg that is now common practice. For every lot that was sold, a donation was made by the builder and matched by Qualico, with the funds being donated towards projects like the the Dakota Community Centre.

With the final cheque written, Qualico’s contribution to the Funds for the Future program totaled an impressive $378,400.

The event was well attended, including several city councilors, and marks the final phase of a decades’ long community development project.