Winnipeg, MB – When StreetSide Developments Winnipeg was developing its District Condos in Winnipeg’s Exchange District, the marketing team knew that capturing the uniqueness of the neighbourhood would be an important way to engage condo residents and community members alike.

As part of developing the brand concept for District Condos’ 139 Market, the team decided to tap into the artistic community that the Exchange District is known for. Their aim was to capture the feeling people get when roaming through the streets of the Exchange District and visiting their favourite hangouts by incorporating a local artist’s work inspired by the area.

In a perfect combination of timing and circumstance, the team found Josiah Koppanyi and his eye-catching artistic style.

“Josiah actually had a pop-up space thanks to a Downtown Biz initiative at the time and the marketing team liked his architectural paintings,” said Kelli Roach, Sales and Marketing Manager, StreetSide Developments Winnipeg. “We commissioned him and guided colour selection, and that it had to feature the Exchange District.”

Drawing from a previous piece called The City of Brukner, Josiah created the bright and cheerful StreetSide Developments piece. The architectural painting features the neighbourhood – Waterfront, specifically – and showcases a backdrop of heritage buildings that the Exchange District is known for, as well as what District 139 is – a converted warehouse with a heritage front. Pedestrians and cyclists round out the scene, and help us connect with the live/work/play feel of the area. 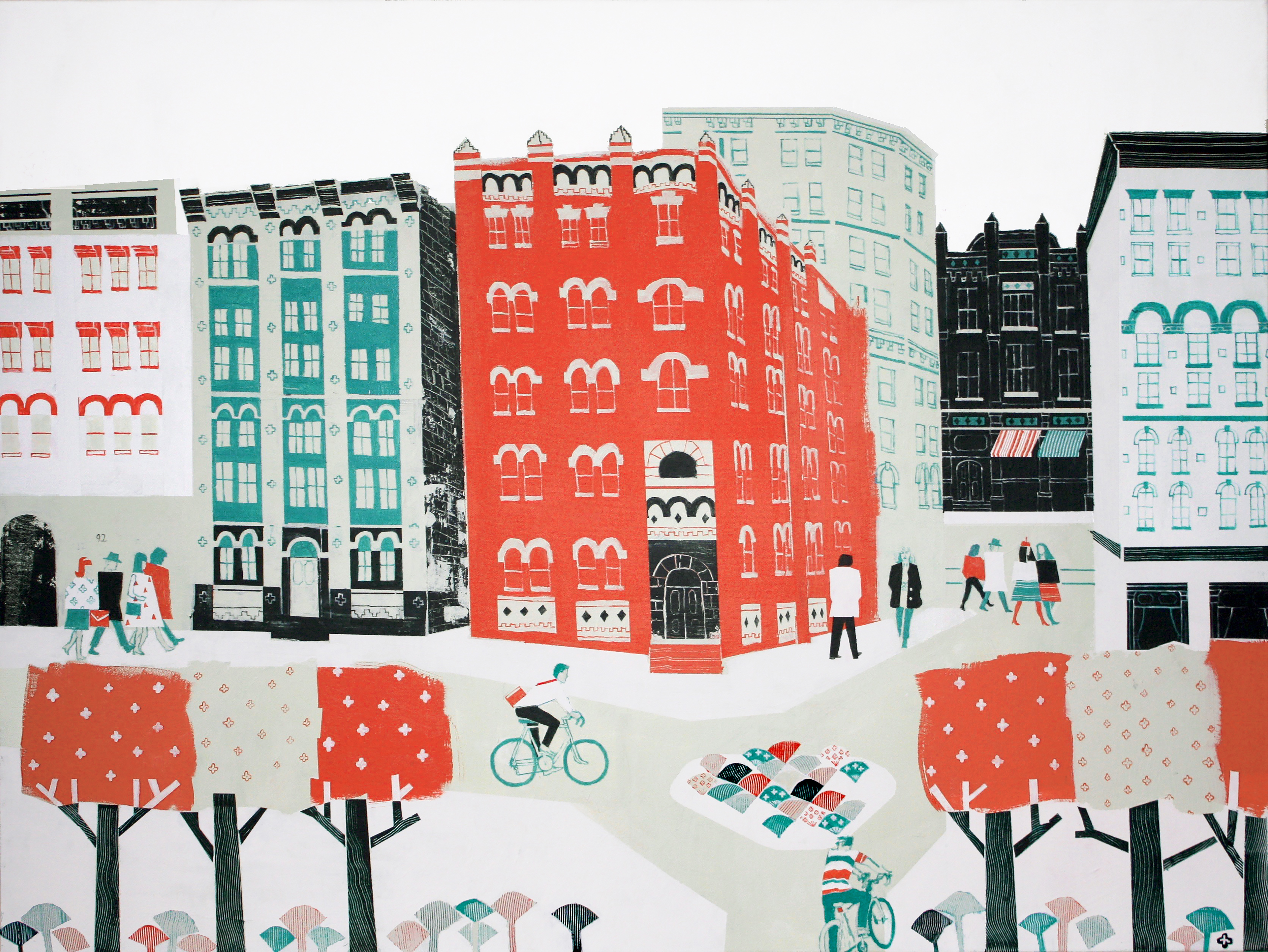 “When I made the red building,” explained Josiah, “I wasn’t looking at the picture (of Albert Street) at the time, and my mind reversed it because I’m dyslexic. It just came out so fluid and I couldn’t have made that shape any better even if I tried, so I inverted the image. You have to look into a mirror to see what part of the Exchange District it is.”

Josiah made a deliberate decision to limit the number of colours used in the piece, which helps it to feel playful, but also sophisticated.

“There are really just four colours in the piece,” he said. “I didn’t want to cloud it too much with too much colour. The colours that I was using were all just complementary to the piece. The stylization was taking what happened and polarizing it more: keeping solid colours very separate, and going in to finetune detail.”

Josiah noted that he was inspired by a few different things while creating the painting, aside from just the neighbourhood itself, and was mostly driven by nostalgia.

“I was inspired by the jazz I was listening to while painting it – in an arpeggio, they would go anywhere within that set. It was almost like I was making very organized, very deliberate sets of colours. I’ve always been fascinated by architecture, and just the older way of life, the ’50s, the ’60s. All the architectural achievements (in the Exchange District) shine so bright, more than any current structure.”

During the process of creating the StreetSide Developments painting, Josiah also had the opportunity to explore some new techniques.

“For one of the pedestrians in the scene, I thought, ‘Why don’t I comb her hair?’” he said. “Then I thought I could do the same thing with the bark in the trees. Now I have a way of doing bushes and trees and plant life that I didn’t have before. I can go as detailed as I want with it.”

Josiah’s piece was prominently featured in StreetSide Developments Winnipeg’s marketing brochure, filled the windows of its building in the Exchange District, and was displayed in various advertising for the development.

“It’s a colourful, unique piece that speaks to the vibrant Exchange District community that is unlike any other in the city,” said Kelli. “Being able to decal the building with Josiah’s art felt like such an important way to market the project and felt truer to the area.”

The artwork made a lasting impression on the condo residents, who felt connected to the local aspect and loved the piece and overall branding of their home. In fact, they loved it so much that they requested assets so they could continue to carry the artwork through to their own condo board materials, notifications, and more.