Surrey, BC – When Qualico employees in British Columbia moved into their new office back in August, they weren’t just transitioning into a beautiful new space, but one that offers many sustainable features as well.

The new office in the Cloverdale community in Surrey is home to StreetSide Developments, Foxridge Homes, Qualico Communities, and Qualico Commercial Metro Vancouver, and employees from all four business units are enjoying the office upgrade. 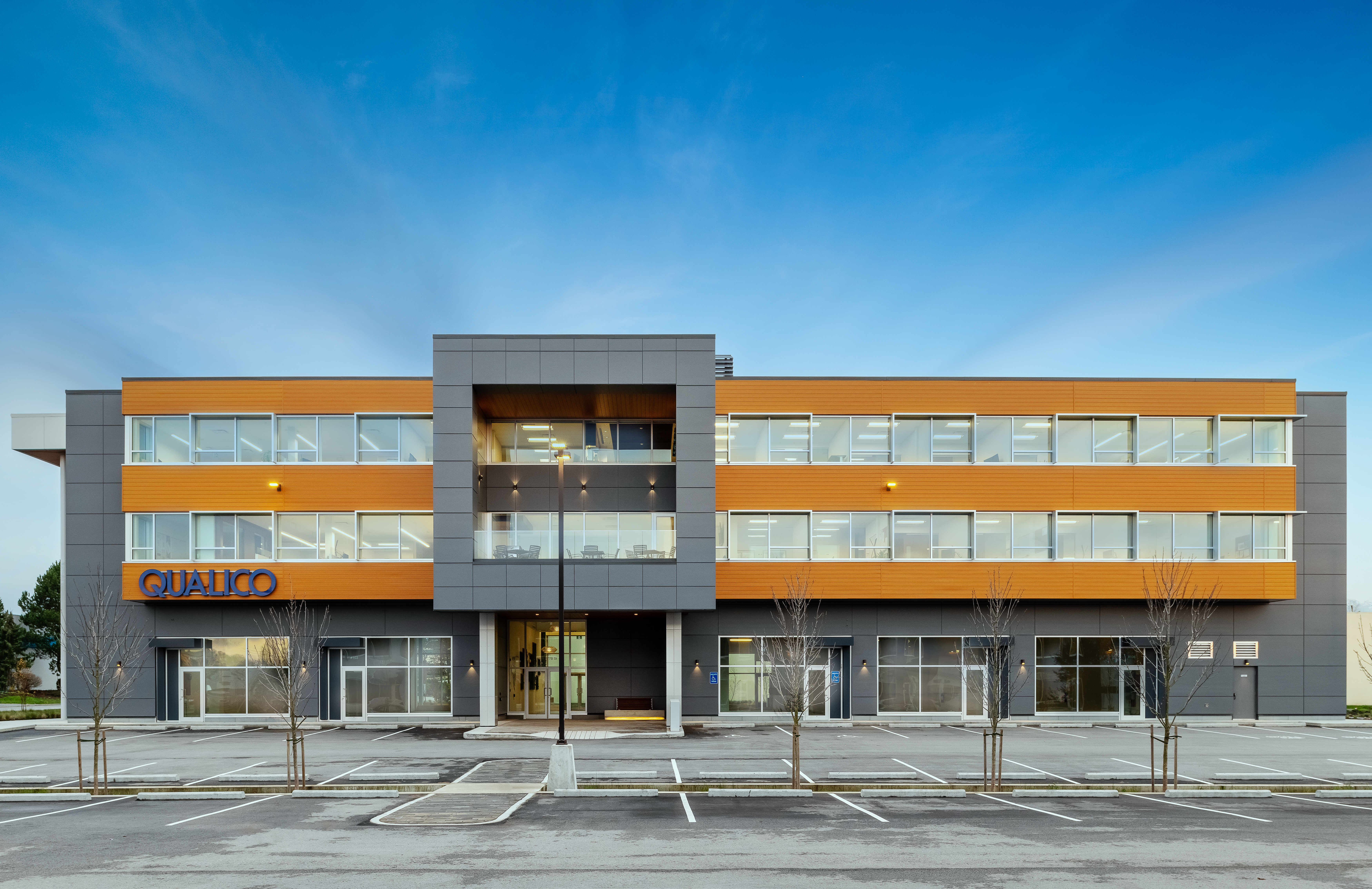 While the aesthetics of the building are certainly worth admiration, Jonathan Meads, Vice-President, StreetSide Developments Metro Vancouver, noted that the sustainability aspects are what really makes the new office stand out.

“Qualico has established a plan to build more sustainable homes,” he said, “and it made sense to do the same with our office – in essence, ‘walk the walk.’ But this is not just about optics, it is about doing the right thing. We all need to do our bit to improve our environment for the future. Our new building will set us apart from many competitors in older spaces, and our office will now match our new, more sustainable homes.”

The site itself has been laid out so that the building can make the most of natural daylight, which finds its way deep into the building. The site also includes drought-tolerant landscaping that will only require irrigation for the first few years as it becomes established.

Stormwater is captured and held in underground tanks to recharge the land, with only excess volumes flowing to the city stormwater system. A raingarden planted in the middle of the carpark acts as a filter so that water entering the stormwater system is clean.

In addition, all LED external lighting is connected to an atomic time clock that can determine when to turn on and off daily, based on the time of year.

When it comes to reducing energy use, the building’s exterior rainscreen system incorporates external insulation (or outsulation) to reduce thermal bridging (a major source of heat loss), as well as built-in vertical and horizontal shading devices on the east, south and west windows to decrease solar heat gain within the building.

"We were not required to build to any environmental standard during the development permit stage,” Jonathan explained, “but our BC building codes required us to address a series of new high standards at the building permit stage. Once these revisions were made, we realized our building was good, so we had the modelling run by our consultant. The office performs equivalent to a Step 3 building under the BC Energy Step Code (20 per cent better than current codes) and exceeds the Qualico goal set last year, which was to be at Step 3 by 2026.”

Meeting the energy codes required upgrading the HVAC system, so the building now has a variable refrigerant flow (VRF) system, with a rooftop unit that is 75 per cent more efficient than standard systems. The system captures rejected hot and cool air internally and sends it to spaces that need cooling or heating first. Hot or cool air only goes to the rooftop unit when no more heating or cooling is being rejected internally.

Any additional heating required for individual offices will be provided via radiant panels that draw only five amps (5A) of power and that will be connected to regular domestic timers that switch off at the end of the day.

“An additional benefit of the VRF system is also that our air is much healthier,” noted Jonathan. “The system transfers heat and cooling energy through a refrigerant. All the waste air is passed through a heat recovery ventilator (HRV) before being exhausted to the outside, with fresh air blended into the air handling unit and tempered by the HRV, so we are not breathing recycled air.” 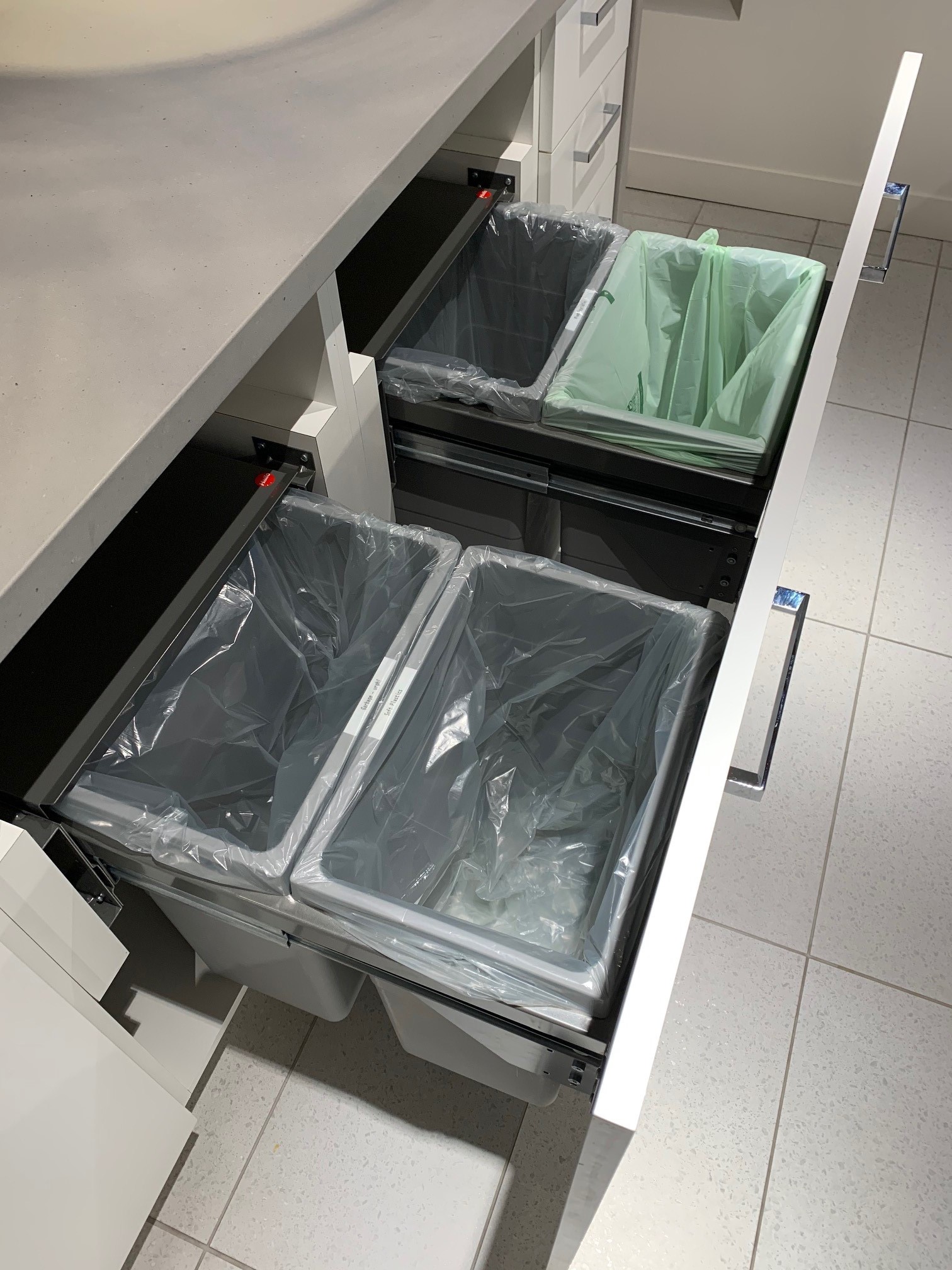 When it comes to waste, the office will be using an enhanced waste diversion program. There are only two garbage bins in the office, located in recycling centres. The recycling centres have pull-out drawers for composting, soft plastics, mixed recyclables, Styrofoam, paper and cardboard, as well as separate diversion for foil wrappers from chips, granola bars and coffee. The team plans to track the office’s waste reduction performance in the future.

LED lighting is used throughout the office, complete with occupancy and daylight sensors. On a bright day, there is enough daylight that the lights automatically turn off. All appliances in the building are Energy Star with low-flow water ratings, and all faucets, toilets and urinals have sensors so that nothing can be left running.

There are opportunities to push the building’s sustainability even further in the future, such as adding photovoltaics to about 80 per cent of the roof, which the HVAC system could use, since it’s electric-based.

“BC is pushing to decarbonize its energy sources and get away from oil and gas for heating and building use,” said Jonathan, “and having a system that is electric (1/9th of the greenhouse gas emissions compared to natural gas) allows us not only to show good leadership now, but in the future, when photovoltaic systems become more viable.”

There’s no question that Qualico’s efforts to create a sustainable new regional office in Surrey will have long-term positive impacts on the company’s costs, the environment, and employees’ health and wellbeing.

“Not only do we hope to have a more efficient and healthy space with better interaction between companies,” said Jonathan, “we hope this will ultimately result in people feeling better about their workspace, with the benefits of higher staff retention and improved staff morale overall.” 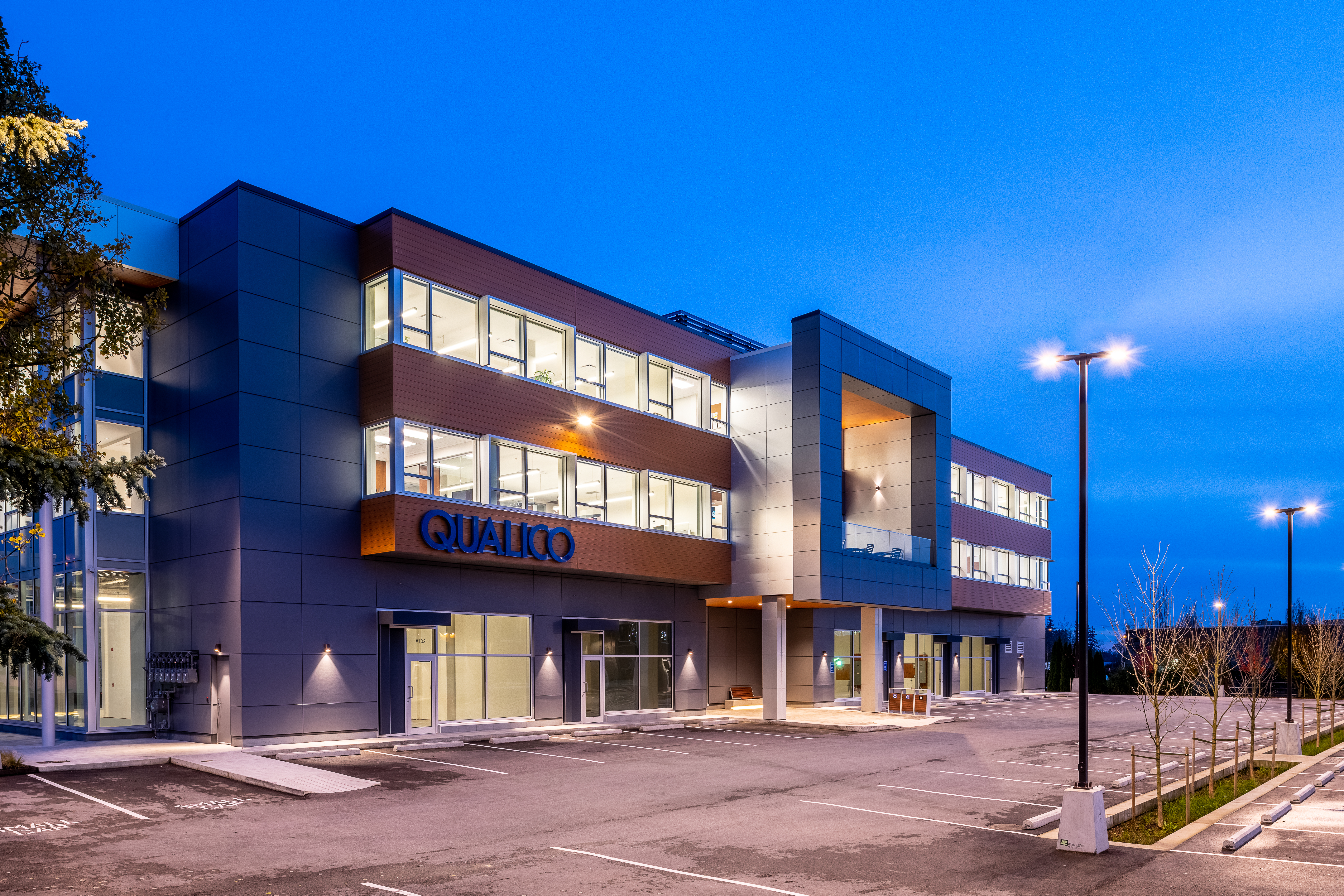