Edmonton & Calgary, AB – Empire Drywall is experiencing a significant year of growth in 2020, despite the challenges the industry has been facing in light of the COVID-19 pandemic.

The company also just celebrated its 50th anniversary with a large celebration (pre-pandemic) that included staff, key contractors, suppliers, customers, friends, and family. The event acknowledged the hard work and dedication that three generations’ of owners and the company’s many employees have brought to the business over the years.

David Campbell, VP Operations / Edmonton Residential Operations Manager, Empire Drywall, said that along with great employees, a combination of factors has led to the company’s continued success, even in the midst of the coronavirus.

“After partnering with Qualico, we obtained a larger share of the company’s work in the Calgary region, which helped that division grow significantly in the last few years,” said David. “Recently, our Edmonton residential division picked up a larger share of Sterling Homes’ work, as well as some work for other builders. This new work, along with our core Qualico contracts, has helped this division exceed our initial budgeted revenues for the year.”

Additionally, David noted that recently recruiting a general manager and a senior estimator for the company’s commercial division has enabled Empire Drywall to generate close to $61 million in outgoing bids so far in 2020. Included in this total is $5.4 million of awarded contracts for future work, including a podium for a One Properties’ tower in the Ice District for Ellis Don and a contract for the renovation of the Center Church in Calgary.

After making some temporary layoffs in Edmonton, Calgary, and Fort McMurray at the outset of the pandemic, it became clear that things weren’t going to slow down for Empire Drywall as expected, particularly in Edmonton, so the company was able to bring back employees fairly quickly.

As well, the Edmonton team has seen some additional expansion with the hiring of a new production assistant, a new field supervisor, and two new labourers/drivers.

The company’s commercial division has been quite busy with two large projects, which have brought in a steady stream of profitable revenue.

One of the projects is the company’s largest ever – the Grande Prairie Regional Hospital located in Grande Prairie, Alberta. To date, the multi-year project has required 80 Empire Drywall workers onsite, and the company has billed $15 million so far ($3.5 million of which has been billed in 2020 alone). 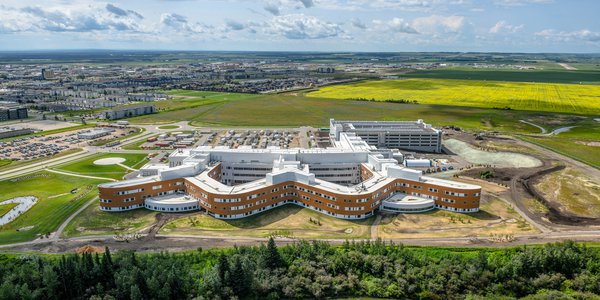 Empire Drywall was pulled into the project to complete the interior steel framing, drywall, taping, and acoustical ceilings on a time and material basis (rather than a standard fixed price contract) to help expedite the project’s completion, as it had faced some delays prior to Empire Drywall’s involvement.

With the main scope of the project now complete, Empire Drywall has submitted a bid of over $3 million (fixed price) to complete the drywall and priming stages in the new construction of the shelled space portion of the hospital, which could begin this fall/winter. The shelled space will be a partially finished area of the building used for storage and possible future expansion.

Now completed, the hospital serves residents of northwestern Alberta, providing them with specialized and complex care close to home. There are 172 beds (with capacity to have 60 more in future), a state-of-the-art cancer centre, eight operating rooms, and a number of specialized units/equipment.

Another major project, The Hub – a 509-bed, mixed-use student housing community located between the University of Calgary and the Southern Alberta Institute of Technology – is Empire Drywall’s largest one to date in the Calgary region at $4 million.

The Hub is one of the five largest projects the company has ever worked on. It is now complete and is expected to open in September of this year. Empire Drywall worked on the exterior and interior framing, drywall taping, and acoustical ceilings for the building.

While David noted that things look like they may slow down a bit in the second half of the year, Empire Drywall is continuing to bid for large-scale projects and he believes the company is in store to see even more growth going forward.

Coming up in late August, Empire Drywall will be involved with a very unique and remote job that will have them loading a new medical building in Tulita, Northwest Territories. The company will ship materials as far as the road north will go and then have them brought to Tulita on a barge before winter. The only access to the area is via air, barge, or the ice roads once winter has set in.

“We do feel 2021 is going to be a pinnacle year in Empire Drywall’s growth trajectory,” he said. “We are quite excited for what the next few years will look like for us.”