In partnership with Paddy Webb and the Dave Lede Family Charitable Foundation, Qualico was a major donor in support of the project, offering expertise and assistance throughout all phases of the home build.

Val Figliuzzi, Executive Director of Kids with Cancer Society, had only praise for Qualico’s involvement in the development of Papa Ken’s House. 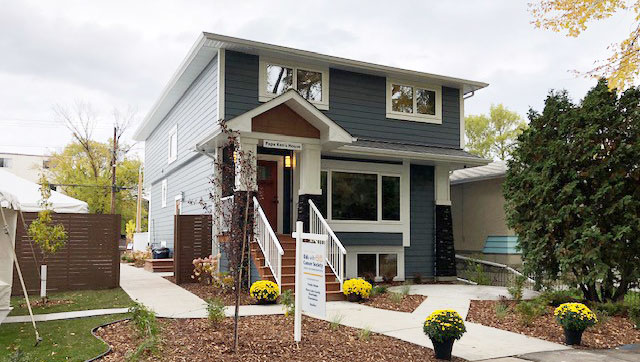 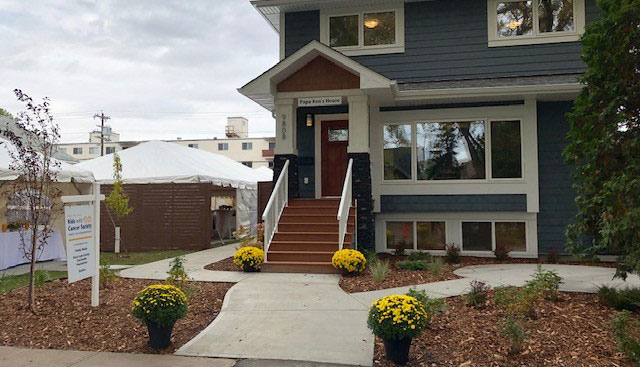 “Qualico should be very proud of the support that they have given to this project,” said Val. “It’s a really well-rounded relationship. It’s not just one event or one donation. It’s the fact that Qualico has really become very much a part of who the Kids with Cancer Society is and what it stands for.”

Qualico’s partnership with the Kids with Cancer Society began about seven years ago when Shane Erickson, Regional Vice-President, Northern Alberta Region, joined the board. One of the organization's initiatives that Qualico's involved in every year is The Inside Ride cycling fundraiser for children living with cancer.

Shane is passionate about the Papa Ken's House cause, and simply felt it was something that Qualico needed to be a part of.

“Here’s a cause that requires everybody’s participation,” said Shane. “You can’t think of anyone who needs you more than families with a child who is going through cancer treatment.”

The facility itself is similar to a bed and breakfast, and can accommodate five families at a time. Staff are available around the clock, and the Kids with Cancer Society takes great care to ensure families have everything they need during their stay in Edmonton.

“Having a child with cancer is so difficult, and there are so many things they have to take care of,” said Val. “Imagine adding to your list: having to leave your home and find accommodation. So we really feel this will take a lot of stress off of families, knowing that this is one less thing they have to worry about.”

When the board began to discuss the idea of building a facility that would act as a “home away from home” for families seeking oncology treatment, Shane jumped at the opportunity to get involved. 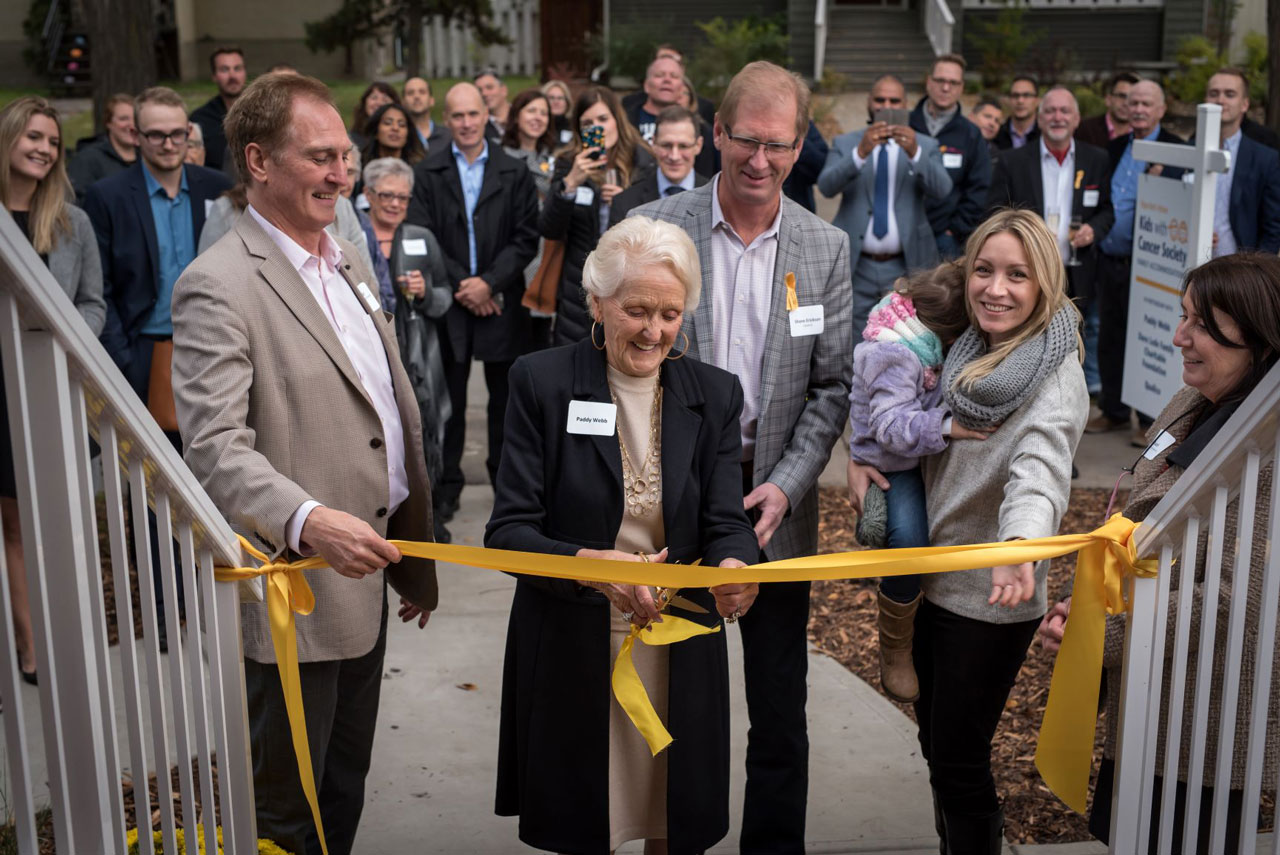 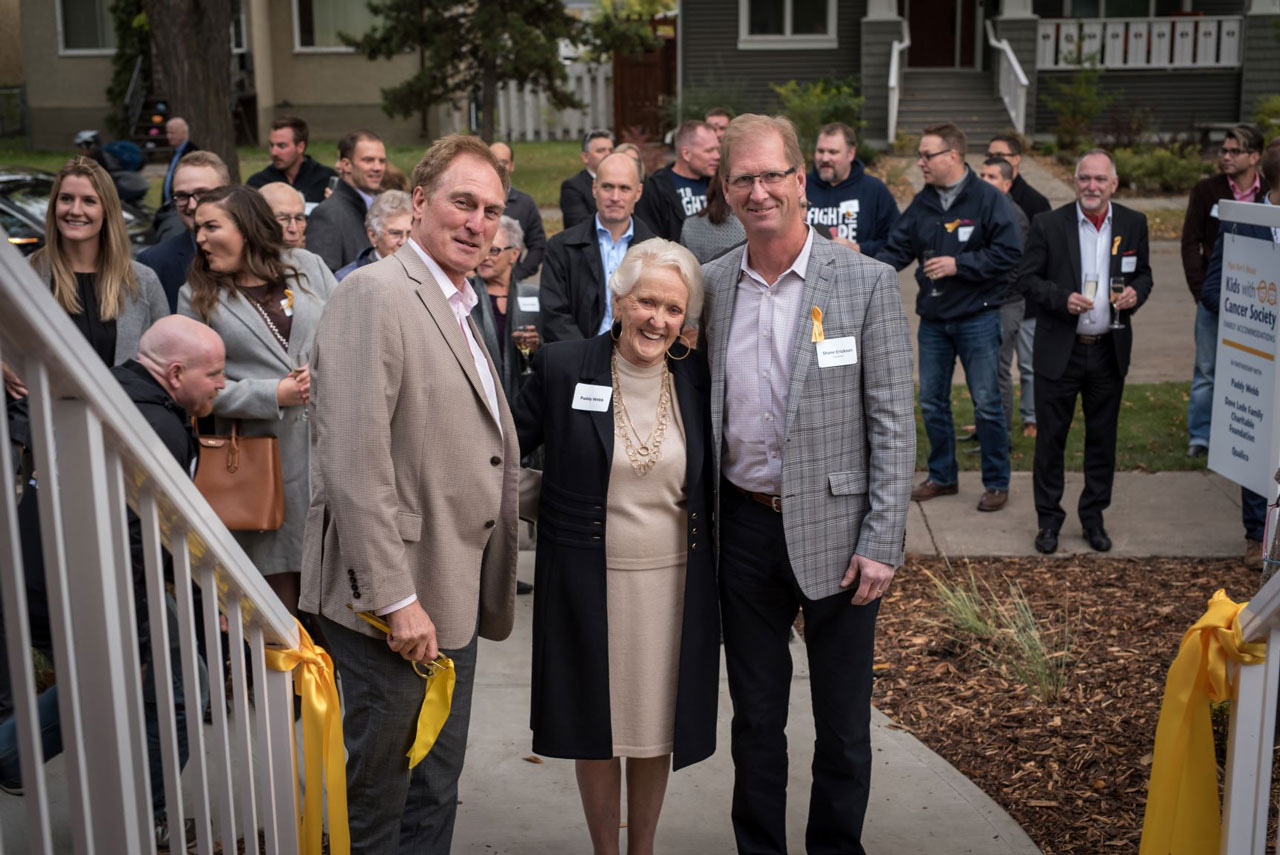 “We’re builders, we’re developers,” said Shane. “This is right up our alley. This is something that we could get behind that makes good sense for us, and it’s a value [Qualico] could add that others on the board couldn’t.”

Throughout the life of the project, Qualico was able to provide an extensive amount of support and guidance.

“Right from the beginning, Qualico was involved in the creation of the structure, including identifying a suitable property and bringing in engineers, architects and suppliers,” said Val.

The project came to fruition fairly quickly, and on opening day, nearly 150 people gathered together to celebrate the momentous occasion, including a number of donors, project suppliers, and members of the community at large.

One of the families that had stayed at Papa Ken’s House just prior to the official grand opening was also in attendance, and was able to share their incredible experience with the crowd.

like any other normal 18-month-old. Without warning, Tessa began to have breathing difficulties and was crying in pain. Initially, doctors thought that her lung had collapsed, but several weeks later, doctors told the family that Tessa had a rare form of childhood lung cancer. Tessa required numerous surgeries and many rounds of chemotherapy.

On May 17, 2017, Tessa finished her treatment and her family celebrated as it was a huge milestone. The treatment was tough but Tessa was tougher.

The family says they have much to be thankful for, but they will still continue to travel to Edmonton every three months for scans and check-ups. Kids with Cancer Society provided hotel accommodations to Tessa's family before Papa Ken’s House, but now, with much thanks to Qualico, the home will ensure that families like Tessa’s receive support when they are away from home.

It takes a community to help children with cancer, which is exactly why Qualico’s support has meant so much to the Kids with Cancer Society.

“We look at Qualico as more than just a sponsor,” said Val. “They are the spirit behind this project.”

Papa Ken’s House is named in honour of Mr. Ken Webb who was one of the Kids with Cancer Society’s early visionaries and advocates. It was Ken himself who once said, “We might not be able to take the cancer away from the child, but what we can do is make their journey a little easier.”