Winnipeg, MB – For the sixth year in a row, Qualico ran its annual charity parking lot ball hockey tournament, with a record-high $10,800 being raised for CancerCare Manitoba and KidSport Winnipeg.

The fun and lively tournament took place in October and November over a series of four weeks in frosty Winnipeg. A total of 75 Qualico employees from different business units made up eight die-hard teams, each playing a series of round robin games over workday lunch hours. 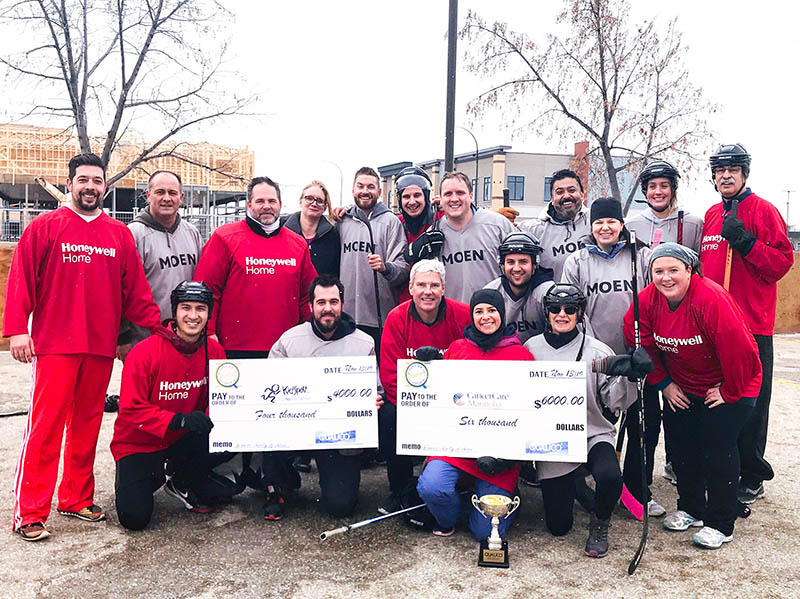 Champions and finalists, Team Resideo-Honeywell and Team Moen respectively, pose for a group photo with the cheques and trophy after the tournament final

Many volunteers were key in making the tournament a success too, whether it was with refereeing, timekeeping, ball-fetching, boards setup and teardown, or helping with the special lunch fundraising events throughout.

“There was such great camaraderie,” said Darren Chambers, Director, Corporate Purchasing and Process Improvement. “Team interaction was incredible. We had mixed divisional teams, so there was an opportunity to engage with people you wouldn’t normally interact with.”

In an effort to increase overall impact, Qualico sought out sponsorship for the event for the first time ever, gaining support from local industry players, who were keen to help and be a part of the fundraising event. The sponsors included Resideo-Honeywell, Moen, Shaw Floors, CertainTeed, Plygem, Dulux, Johns Manville, and Kohler.

“It means a lot to even get asked,” said Ross Wright, Senior Territory Manager, Moen. “It’s for a great cause and we don’t ever shy away from participating in things like this.”

Curtis Headland, Territory Manager, Resideo-Honeywell, felt the event was an incredible opportunity to give back to the community, citing the donation as a means to support a worthy local charity.

“We really value the partnership we have with Qualico, and it was such a great event,” said Curtis. “We were happy to be able to provide a donation.”

The top two teams each selected a charity for the funds to be donated towards, with Qualico matching the amount. As champions, Team Resideo-Honeywell chose CancerCare Manitoba to receive a grand total of $6,480, while Team Moen, as the tournament finalists, chose KidSport Winnipeg to receive $4,320.

In celebration of the tournament’s fundraising success, Qualico – alongside the tournament’s organizers, participants, volunteers, and the Resideo-Honeywell and Moen representatives – presented the donations to CancerCare Manitoba and KidSport Winnipeg at a short ceremony held at the Qualico head office. 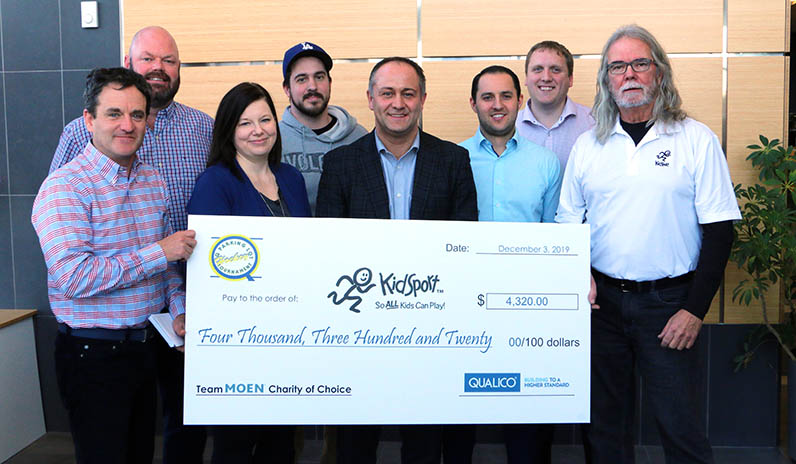 KidSport provides funding to a maximum of $300 per child, per calendar year, for registration fees for over 100 different sports. With Qualico and Moen’s donation, this means at least 14 kids will be able to play a sport this year.

“On behalf of KidSport Winnipeg, I would like to extend our very heartfelt thank you to Qualico and also all of the members of Team Moen who chose KidSport as their charity of choice for their donation,” said Rick McGregor, KidSport Winnipeg Chair. “Money from events like this support underprivileged kids who couldn’t otherwise afford to participate in sports. Everything from badminton to soccer to baseball to martial arts. It’s so great that Qualico chose KidSport as a recipient of this generous donation!”

Sherelle Kwan, Community Events Manager, CancerCare Manitoba Foundation, expressed great gratitude for the donation, remarking that we all know someone who has received a cancer diagnosis, and that the dollars go towards helping friends and family. 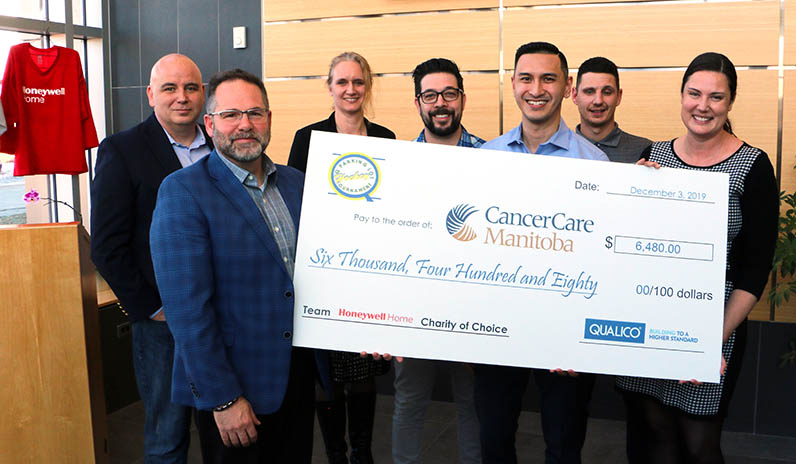 “We’re incredibly grateful whenever organizations like Qualico get together, and get their employees engaged,” said Sherelle. “It has such a huge impact. We always say, give your passion a purpose, and this is a great example of people who took ball hockey and decided to give it a bigger purpose.”

“What these donations do, is they support clinical trials, research, and patient and family support services,” Sherelle added. “So the dollars raised have an immediate impact, and they stay right here in Manitoba.”

With another tournament in the books, employees are already looking forward to next year’s tournament with great excitement.

“It’s more than just an event,” said Darren. “All of it fits in with the culture of what Qualico is all about:  it’s about promoting a healthy lifestyle, it’s about employee engagement, and it’s about a charitable donation that goes towards supporting the greater community.”